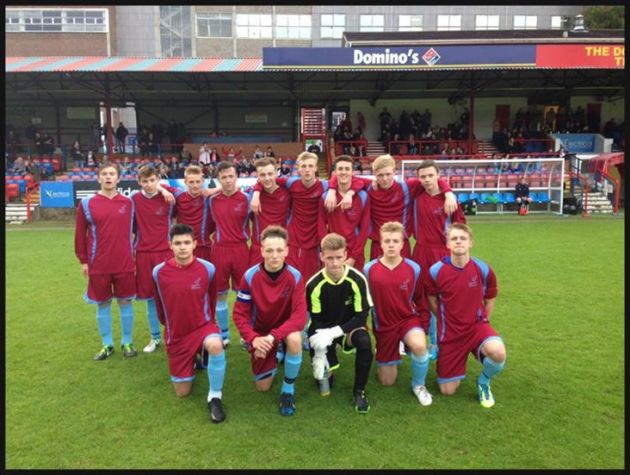 The team went into the game full of confidence, wearing their brand new personalised kit.

The game started at a quick pace with both sides trying to gain an early advantage. Backed by a boisterous crowd, it was our side who got that first breakthrough, with a great strike by Rory K (Y11 S03) from 20 yards. Resolute defending and some great saves by Harvey Stevens kept us in front at half time.

All Hallows kept on pushing us back, and eventually, they levelled with a superb 25 yard effort into the top corner. As the game went on more and more players from both sides went down with cramp as the heavy pitch took its toll.

The game was still level at the end of full time, and so we went to extra time.

The combination of Tom S (Y11 K01) and George M (Y11 K09) almost put us back into the lead however the All Hallows defenders blocked it on the line. The game was edging towards penalties until All hallows were awarded a penalty with a minute to go. Harvey S (Y11 K06) almost saved it, but the ball squeezed into the bottom corner.  The penalty was decisive and All Hallows held out to win.

It was a superb last performance by the boys who gave absolutely everything.  The last three years have seen them reach three Cup Finals, winning the Hampshire Cup Final last year. Six of the squad have played District Football, while four have represented Hampshire Schools this season.

Well done to entire squad who have played over the last five years. It has been a pleasure to work with you all!