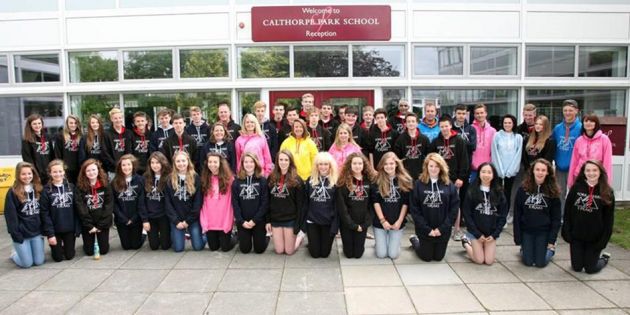 42 students and 7 staff had been in training since March for the famous Yorkshire 3 Peaks Challenge.  We had covered approximately 200 miles of serious training around the roads and canals of Fleet and Church Crookham, usually ending up at Caesars Camp for a gruelling session of hill work.  The only thing we had not prepared for was the camping; the students were far more enthusiastic about this than the Staff.

On Sunday, 29th June, after a challenging night under canvass, we set off shortly after 7.00am in 2 separate groups in opposite directions, aiming to beat last year’s time of 10 hrs 37 minutes.

Throughout the day we were confronted with injuries, exhaustion (both physical and mental) and a very challenging terrain with some extremely steep and slippery hills.

The groups met half way, with the competition getting more intense.  Everyone experienced highs and lows, but the team spirit pushed us beyond boundaries that we hadn’t thought possible.  This was no walk in the park, and no amount of training could have prepared us for the intensity of this challenge, but our victorious time of 9hrs 57mins made it all worthwhile.  The money raised is testament to the hard work and dedication shown by the team and everyone should be extremely proud of this achievement.

We would like to thank everyone who took part in the challenge and those who supported us, including Mr Jones back at base.
Mrs Hayley Fisher, Supply Cover Manager

On Sunday 29th June, after many weeks of training and preparation, students and staff took part in the Yorkshire 3 Peaks Challenge.  The physical and mental test was to raise a large sum of money for The Royal Marsden Cancer Charity and to create more awareness.

The weekly training was tedious and brutal, however, reflecting on the first mountain (following the challenge) it seemed relatively easy. The pressure was on to beat the time set by last year’s group which was 10 hours 37 minutes. Both groups succeeded in doing so with the first in finishing in 9 hours 57 minutes and the second  at 10 hours and 3 minutes.

Despite the midges at the campsite, the whole trip was an amazing experience, and I personally could not have completed this challenge without the motivating help and support from the team.

Currently, the money raised stands at over £6300 and more is coming in each day which is a fantastic amount. A massive thank you and congratulations must of course go to Mr Jones, who organised the successful challenge but was unable to take part due to the arrival of his new son.
Jess Stevens M07